Canis familiaris originated from wolves close to 100,000 years ago. This canine was domesticated by humans and as a result of centuries of selective breeding, the modern canine species has become quite diverse. From 4 pound Yorkshire terriers to 200 pound English mastiffs, snorting bulldogs to snoozing basset hounds, and from the herding instincts of Australian shepherds to retrieving sporting breeds, humans have bred dogs for certain traits. These breeding practices have focused on preserving  the preferred traits of one generation to the next, but they also manifested in many unforeseen genetic disorders, such as, cancer,  cataracts, epilepsy, hip dysplasia, heart disease, and deafness.

The notion of genetic based medicine has been present for years in the veterinary profession.

We have known for decades that certain breeds are predisposed to certain diseases and some recommendations can be made based on the breed or genetic mix of the animal. For example, Doberman pinschers are predisposed to a bleeding disorder known as Von Willebrand’s disease, while Maine coon cats and some large breed dogs are predisposed to a heart condition known as dilated cardiomyopathy.   From glaucoma to urinary stones, there are literally hundreds of diseases that have a genetic link and many of these diseases can be treated if diagnosed at an early age. 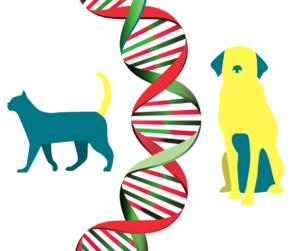 In 2005, researchers at the Broad Institute (Harvard and MIT) completed the genomic sequence of the dog. Subsequently, in 2007, scientists at the National Cancer Center in Maryland released the first fully mapped feline genome. This monumental research has provided the veterinary profession with the tools to develop genetic tests for a vast number of diseases. The preventative value of such testing can be extremely helpful for patients with these genetic predispositions. It is even more valuable as we look at the potential for objective screening of breeding animals moving forward.  As these diagnostic screenings have become commercially available, the number of inherited genetic diseases that can be identified has increased and with time will become more cost effective.

Although we have significant discoveries still ahead of us, we are now able to screen for future disease occurrence with a simple cheek swab.

Pure bred dogs obviously have the most studies for application of this technology but with time we will be able to apply it to any mixture of genetics as well as apply what we have learned to the human medical field as well.  At SVA , we are dedicated to continuing to educate ourselves in how we can better care for your pets.  Genetic testing and screening is an exciting technology that is having an increasing impact on the way we practice now and into the future.

One Response to What’s My Pet’s Genetic Blueprint?

Queen Anne Animal Clinic
Monday - Wednesday, Friday: 8am to 6pm
Thursday: 8am to 8pm
Saturday: 8am to 5pm
Sunday: Closed

SVA On the Go
Tuesday and Thursday: 9am to 4pm
Monday, Wednesday, and Friday: 9-5 by phone
Saturday and Sunday: Closed